A trip to Knoebels.

We bought the station wagon in 2003 and gave it to Abby last week. Today she loaded it with a bicycle, her guitar and some clothes, waved goodbye and started a cross-country road trip to Berkeley for graduate school.

Over the last thirteen years I have driven that car to hundreds of swim practices and meets and to camping trips and birthday parties with her friends. Every summer we drove it to the Adirondacks, often listening to Jim Dale read aloud the seven book story of Harry and Ron and Hermione.

When Abby went away to high school I drove it to visit her, sometimes twice a week during swimming and water polo seasons. One Christmas her present to me was five hours of music on CDs to keep me company during those long drives. When she graduated we drove it to a music festival in Tennessee and camped behind it for three very hot days and muggy nights. 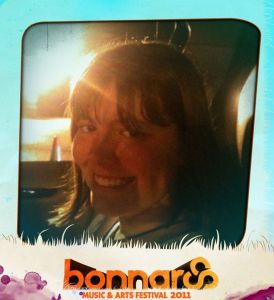 After Abby moved to Chicago for college most of my trips in the station wagon involved swimming events with new friends. I drove it to open water swims in Ocean City and New York and to Lake Placid to hike and ski with friends. It carried my bike to the Iron Man and my canoe to Cooperstown.

But of all these travels, I cherish most the memories of the times when Abby was younger and we would stop at the Knoebels amusement park on our way home from visiting my mother as her health deteriorated. 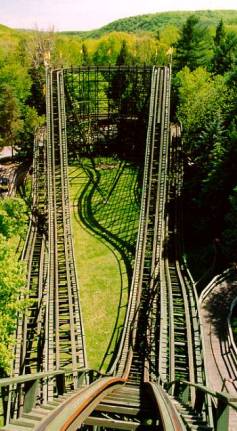 It was about halfway and Abby loved riding the two wooden roller coasters there. On nice summer days we would spend a few hours riding the Phoenix and the Twister and maybe take a swim in the large swimming pool before grabbing a quick meal and finishing the rest of the drive. It was the perfect remedy to help us feel better no matter how sad our visit had left us.

Abby is now on her way to Berkeley driving the station wagon we bought in 2003. I love the memories made in that car and I’m not sure when I’ll replace it. But when I do I’ll be sure to find my way back to Knoebels Grove to ride the roller coasters and maybe swim a while in the large pool there.

Earlier today I finished the 3 mile Purple Swim to support pancreatic cancer research. There was a one mile swim followed by a two mile swim with the option to swim both, which is what my friends and I chose to do this morning.

The day was beautiful and the conditions were perfect. The humidity was low, with a water temperature in the high 70s. The water surface was basically flat. It was like swimming in a pool without having to do any flip turns.

At the end of each swim, I walked ashore and under the purple banner pictured above and remembered all the times my father encouraged me to finish what I started. My father never rushed into these matters. He waited, let things simmer a bit, and then said just the right thing to convince me to keep going.

I now realize that by encouraging me in this way, my father taught me a more valuable lesson. And that lesson was that once you know you can finish whatever you start, you will never be afraid to push your limits and strive for higher goals.

I just signed up for the “Half Full” triathlon scheduled for October 6th in Ellicott City. Until this morning, my plan had been to swim, bike and run for a total of 40 miles. Inspired by the memory of my father's lessons, I instead signed up for the 70 mile course.

I don't know how I'll do on October 6th, but I will finish.

This one’s for my father. 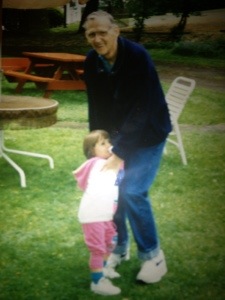 He was not a stellar student. He attended Cornell University for a year or so, did not do well, and enlisted in the Army shortly before the outbreak of the Korean Conflict. After his honorable discharge, he finished college and then law school. He spent a few years as an Assistant Attorney General before starting a law practice in Sidney, New York, where he worked regularly until he died. He married Mary Ann McGrath on January 24, 1959.

He became jaundiced in 1994, shortly after our daughter Abigail was born. The doctors originally hoped that removing his gallbladder was all that would be necessary, but quickly discovered pancreatic cancer. After doctors at Johns Hopkins performed the Whipple procedure, he spent the summer of 1994 recovering at our house in Baltimore, resting for many hours in a hammock we had hung on the porch. Although Abby doesn’t remember much about his stay, he enjoyed visiting with her everyday that summer.

He returned to New York in great spirits and spent the next two years living his life to the fullest. At first the prognosis seemed promising, but ultimately the cancer returned and spread to his lungs.

He died on July 13, 1996, on my mother’s 62nd birthday. I left him earlier that day to drive back to Baltimore, explaining that I would visit him again on the next weekend. He died shortly after I finished the drive. We buried him in Ithaca two days later.

My next open water swim is this Sunday at Rocky Point Beach and Park. Together with several friends, I will complete the three-mile Purple Swim to help raise money for the Pancreatic Cancer Action Network.

Although the treatment provided my father did not cure him, I am forever grateful to the doctors who did their best and gave my father two years to get to know his granddaughter. And for this reason I will swim on Sunday in memory of him and in honor of the families who are currently struggling with a disease for which there will likely never be a cure.