They settled it on the field.

My nephew Alex is in his senior year and he and his best friends are in the middle of a football playoff run. Nate and Alex both play receiver on offense and corner back on defense. Alex also serves as the punter and Nate returns kicks for the team. Colin is a lineman and Kyle, a star on the basketball team, serves as the unofficial mascot so that he can  watch the games from the sidelines. They visited me in Lake Placid last summer and we climbed Seymour mountain and kayaked through the upper lock to visit Middle Saranac Lake. I asked about the upcoming football season during their visit and sensed that they did not expect the team to do well this year. 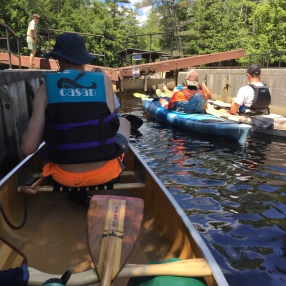 Football is big in the small village where I grew up and on game days there is no one more proud, or nervous, than the mother  of a varsity team player. They belong to the “Grid Iron Mom” club and wear t-shirts with their son’s numbers embroidered on the shoulders. They make pictures of their sons wearing football uniforms into small lawn signs and serve spaghetti at team dinners on the night before every game. Today they left town before the team did so they could hang good luck signs on an overpass and wave to the team bus as it passed below them on the interstate. 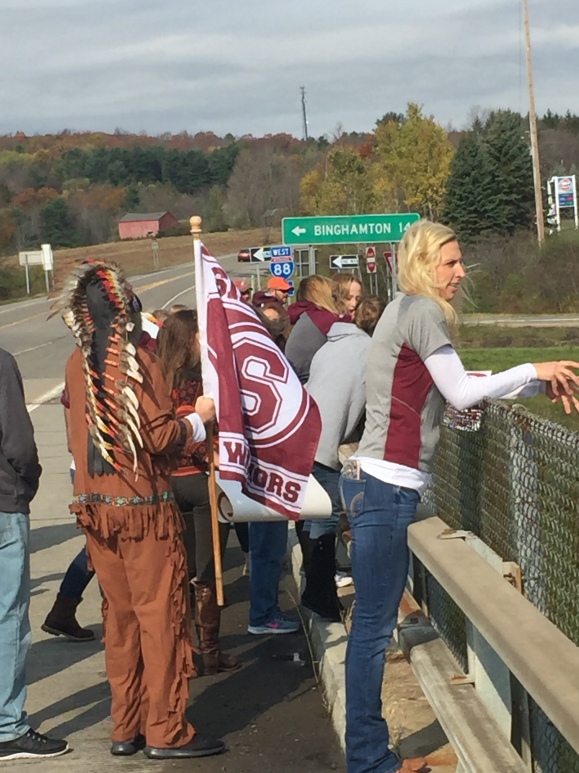 The team struggled early in the season and made the playoffs as the bottom seed after a four win and three loss regular season. They were expected to lose badly last week against the top seed but they played their best game of the year and won convincingly on a cold and rainy night in Greene.

I had business in New York this week and decided to delay my trip back to Baltimore so I could watch today’s game. I arrived in Sidney late yesterday only to learn that the game might not be played. The other team, Harpursville-Afton, had played all season with an ineligible player and been disqualified after admitting the infraction. An appeal was pending and late yesterday the disqualification was overturned to the dismay of many of the football mothers, my sister-in-law included. 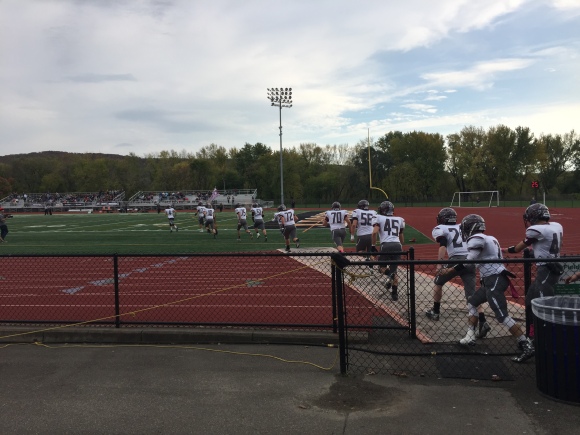 The game started at 3 this afternoon and was played at a neutral field in Endicott, about an hour’s drive from Sidney. After the coin toss, Sidney received the opening kickoff. Alex caught the first pass of the day and Nate caught the second for a large gain. Quarterback Darren Smith’s third pass was thrown under pressure, intercepted and returned 80 yards for a touchdown. He kept his cool, though, and would end the game with 28 completions for 445 passing yards, probably a school record.

On their next possession Sidney moved 63 yards down the field on long pass plays but was stopped on the 2 yard line. Harpursville-Afton’s next drive started well, but Colin made a key stop and Sidney was back on offense. Harpursville-Afton had no answer for the Sidney passing game and Alex, Nate and the other receivers made long gains before Sidney’s second drive was stopped at the 12 yard line. The first quarter ended with Sidney trailing 6 to zero.

Sidney finally scored on its second possession of the second quarter after a 59 yard screen pass play to Alex brought Sidney to the one yard line. Sidney scored on the next play and with 6:19 left in the first half the score was tied, 6 to 6.

Sidney almost always attempts an onside kick. It usually doesn’t work and today’s first attempt also failed but the Sidney defense made up for it. The opposing quarterback was pressured on third and long and intercepted. Sidney scored three plays later on a 46 yard touchdown pass. The two point conversion attempt failed but, with 5:09 left in the first half, Sidney took its first lead, 12 to 6.

Sidney’s second onside kick worked but the drive ended with another interception on a long 4th down pass. Harpursville-Afton scored three plays later to take a 13 to 12 lead at the end of the first half.

Harpursville-Afton started the second half with a dominating run game, driving 75 years to score again and extend the lead to 8 points. Harpursville-Afton’s attempt at an onside kick failed and Sidney answered by driving down the field with pass plays before scoring on a trick play with five minutes and forty-six seconds left in the third quarter.

Another Sidney attempt at an onside kick failed, but two plays later Alex intercepted a pass to end the Harpursville-Afton threat. Sidney’s first play from scrimmage was a twenty-five yard pass to the 19 yard line. Another pass brought Sidney to the one yard line. Sidney took the lead on the next play, having scored 16 unanswered points in just over three minutes. Harpursville-Afton did not give up and tied the game again on its next possession. But Sidney returned the ensuing kickoff for a touchdown as time expired ending the third quarter.

The fourth quarter started with Sidney leading 34 to 28 but unable to recover an onside kick attempt. Harpursville-Afton fumbled again and Sidney failed to score on a fourth down play. There were seven minutes and twelve seconds remaining when Harpursville-Afton took over but another fumble put Sidney back on offense with less than five minutes remaining.

A 30 yard pass to Alex brought Sidney to the 20 yard line. Three minutes remained in the game. A play later Sidney was at the 2 yard line with a first down, goal to go. Harpursville-Afton refused to let Sidney score and seal the game and took over after four failed attempts by Sidney to advance the ball beyond the goal line. Harpursville-Afton had no time-outs remaining, and 95 yards to go with 65 seconds left in the game. After a long run by their quarterback they were at the Sidney 32 yard line. There were 22 seconds left. Another long run brought them to the 5 yard line with 8.2 seconds remaining. Though it seemed certain they would score, somehow they were stopped short on the next play and the clock counted down to zero with Sidney still ahead, 34 to 28. The moms in the Sidney stands went wild.

Alex finished the game with twelve catches for 179 yards, a pretty long punt and an interception and a fumble recovery. Nate had four long catches for 47 yards and some nice kickoff returns. Colin and the other lineman protected their quarterback well throughout the game and on defense stopped the run when it mattered most. It was a great game and I am glad I was able to be here to watch Alex and his friends play so well together.

I will leave it to others to debate whether or not Harpursville-Afton should have been allowed to play today. “Rules are rules,” after all, and in fairness normally should be enforced. I suspect however that when they look back on this game many years from now, those who played in it will be glad that the team from Harpursville-Afton was allowed to compete and that Sidney made it to the finals by winning the game and not by way of a forfeit. They settled it on the field today and the better team won.

Best of luck next week Alex, Nate, Colin and Kyle and remember, above all else, to have fun and enjoy the game.