My nephew Tommy lives in the house where my father died. He sleeps in the room I shared with his father before I moved a bed and some other furniture to the shed next to the garage. In a week he will graduate from Sidney Senior High School, thirty-seven years after I received my diploma from the same school.

This weekend Tommy brought three of his friends to Lake Placid to celebrate their graduation and to hike with me to Algonquin Peak and Wright Peak.

We arrived at the trailhead before 8:00 AM and took our first rest break as we crossed below the waterfall on MacIntyre Creek. We hiked quickly and were the first group to make it to the summit of Algonquin today.

The summit was encased in fog and the wind was strong and very cold. We finished our lunches quickly and headed back down to pick up the trail to Wright Peak. It was still foggy when we reached the top but we stayed long enough to watch the fog finally lift, revealing a magnificent view of the peak we had just climbed. 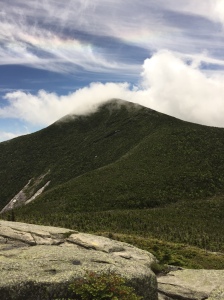 The trails were wet and slippery during the descent and before long Tommy, Brandon, Kyle and Nick pulled away from me.

As I walked down the trail by myself it occurred to me that the town where we all grew up has changed drastically since the day I received my diploma. The factory that first made Magnetos for the Army Air Corps during World War Two and later important components used in the Apollo lunar missions is nothing like it was in the 70s, having lost most of its manufacturing jobs when they were moved to Jacksonville, Florida. The movie theatre in the center of downtown closed years ago and the roller rink recently burned to the ground. The village’s oldest houses along River and Bridge streets were devastated by back to back floods and may need to be torn down. The football team used to have to play all of its games on the road because the field didn’t drain right. Even the traffic signal on Main Street has stopped working.

And yet somehow despite all this my home town has survived and still remains a great place to make friends who will last a lifetime. And for Tommy, Brandon, Nick and Kyle that is more than enough.