Archives For The Sidney Center Seven

The restaurant was crowded and they added a table to the end of a booth to make room.

We had arrived the night before. It was our reunion and it had been forty years since we graduated from the high school in the small town where we grew up.

That town was a factory town. My classmates were the children of the men and women who built the engine magnetos that won the second World War and the electronic parts that helped astronauts land on the moon.

We grew up together in turbulent times. We were too young to understand why our parents cried after learning that President Kennedy had died in Dallas. We were in second grade when Martin Luther King and Bobby were killed.

Jane Roe won her case against Sheriff Henry Wade when we were in seventh grade. Later that year Nixon went to China. He resigned in disgrace before ninth grade began.

The war in Vietnam began before we were in kindergarten. Seven boys died within weeks of each other during the Tet Offensive and the last Americans left Saigon from the roof of the embassy in the spring before we entered high school.

We did what children everywhere did. We finished our homework before bedtime and walked or bused to school. We fretted over braces, pimples, bad hair and clothes that didn’t fit. We worried about the SATs and thought about college, careers and someday getting married and raising families.

Tonight we spoke only of the good times we had shared years ago. Frisbee games and prom dates and dancing to slow music. Messages left on yearbook pages, indoor track records and traveling to Florida with the marching band.

We smiled and laughed and did not cry.

The restaurant was empty when we said goodbye. The dishes were cleared and the extra table was pushed back to where it belonged, removing too soon the last sign of a perfect reunion.

Three nephews, three races. That is the deal I struck with Tommy, Alex and Matt in 2014. Alex was my partner last year. This Memorial Day it’s Tommy’s turn.

Memorial Day has always been a special holiday in Sidney. My sisters, brother and I grew up marching in the annual parade in our Boy Scout and Girl Scout uniforms. We would start at the Prospect Hill Cemetery. From there we marched down the hill, across the railroad tracks, past a sandwich shop and along Main Street to a flagpole in front of the village Post Office for a wreath laying ceremony. After the parade we’d visit the Regatta grounds for one last day of carnival rides and food before heading back to school on Tuesday.

This Memorial Day weekend Sidney dedicated its newly finished memorial park to veterans. I didn’t make it in time for the opening ceremony but visited it with Tommy and Matt before heading to Cooperstown for the start of this year’s 70 mile endurance race. 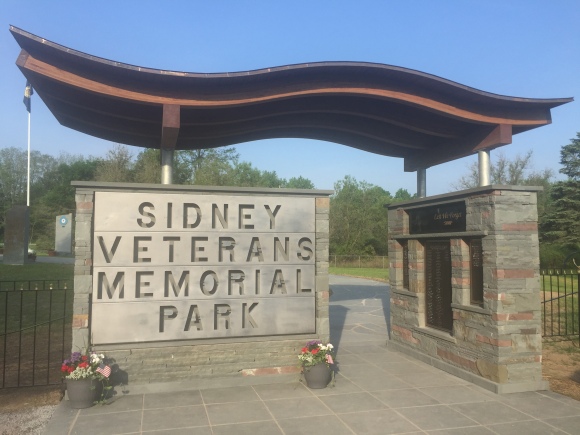 I spend most of my visit studying the memorial to the veterans from my high school  and learn that the American Legion Post my father belonged to was named for Charles Jacobi who was killed during the First World War and that two brothers, Kenneth and Douglas Keller, lost their lives during the Second. I cannot imagine how devastating that must have been to their parents and classmates. 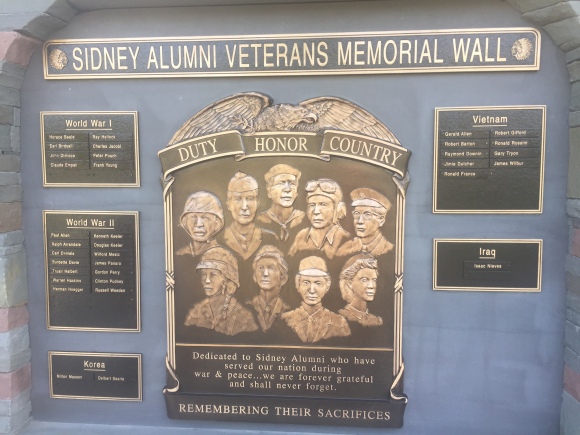 Then I read the nine names on the Vietnam plaque. Seven of these veterans grew up in a small nearby town called Sidney Center. At the time it had a population of about 500 and in a period of less than 90 days seven families received visits notifying them that their sons had been killed. I did not know them or their families but you can read about them here, and you should.

While studying the plaque I remember what it was like to grow up during that conflict. I was not yet 4 years old when Congress passed the Gulf of Tonkin Resolution that authorized the use of conventional military force in Southeast Asia. I was 7 when 70,000 North Vietnamese and Viet Cong troops began the Tet Offensive, the battle that would take the lives of the seven young men from Sidney Center.

Woodstock would take place 70 miles from the house where I grew up, during the summer before I turned 9. My friend Sandy, who lived in Sidney Center, would later wear a POW Bracelet. The war would end and Saigon would fall before I graduated and that is why, thankfully, none of my classmates’ names are on that wall.

I spend the rest of the day preparing for Monday’s race and watching Alex and his friend compete in the 15 mile sprint race. On race day we are a little behind schedule getting to the start line and in the rush I drop my sunglasses into Otsego Lake. I try to scoop them with my paddle but it doesn’t work and I watch the glasses that I was wearing when I crashed badly on my bike and when I crossed the finish line of the Lake Placid Iron Man sink slowly away.

The race was grueling, as I suppose it always is. It was hot and humid in the morning and then it rained when we had about 12 miles to go. Tommy worked hard all day and our paddling was evenly balanced and efficient. We made it through the most challenging sections of the river without any problem but flipped later after misjudging any easy rapid just south of Wells Bridge. The heat took its toll and the first half of the race went much slower than last year. We were faster below Oneonta and finished just a few minutes behind last year’s time.

I leave Sidney early Tuesday and pass through downtown. It looks much different than it did in the 1970s. I drive down the hill and across the railroad tracks and remember that when the ceasefire was declared in 1972 the sandwich shop located there changed the letters on its outdoor sign to read “Peace – Thank God” and how relieved everyone in Sidney was that the Vietnam war was coming to an end.

I stop at the newly repaired traffic light and then cross over the river on my way out of town. I am a bit sore and glad to leave the river behind me. But more than anything, I am proud that the tiny village where I grew up has built such a fitting memorial to the nine Sidney graduates who did not live to see the message on the sandwich shop sign at the bottom of the hill across the railroad tracks.