My paternal grandfather, Edwin Ray Hoskins, was a professor of agricultural education at Cornell and an avid genealogist. The family history he published in 1963 is full of stories about journeys and choices in life, but none more fateful than the story of a young British sailor who one day decided to walk away from his ship and start a new life in America.

That sailor, William Presbrey, was born in Blackfriars, a section of the southwestern part of old London, in 1690. Parents at this time often “bound out” a child to another family, or elsewhere, to remain until he became of age, to learn a trade. And when William was ten years old, he was bound out for service in the British Navy.

Eleven years later his ship landed in Boston Harbor and, on July 30, 1711, William became a deserter after being granted permission to go ashore. Instead of returning to his ship he fled Boston, walking for four days through the fields and woods until he reached Taunton. There he stopped at the house of Nathaniel Crossman, who was a farmer, miller and shoemaker.

Nathaniel hired William for a year or two and history recounts that William rigged the first properly equipped sailing vessel used on the Taunton River, drawing on his training from the British Navy. William then married Hannah Smith from one of the oldest families in the Colony and lived until he was eighty-one years old. William and Hannah had two sons, William and Joseph, and one daughter Hannah, who died a young woman.

Lydia married Samuel Hoskins, who fought in the War of Independence. Their journey together is a story for another day.

For now, I’ll close with an ironic quote from Joseph Waite Presby’s genealogy:

Someone has said: “trace your ancestry back a few generations and you will find a gallows and a member of the family hanging on it.” That might be true in some families but it is not true of the descendants of William Presbrey. We have found no record of any one in our family who has ever been tried in court for any crime or misdemeanor, or been sentenced to prison. We do not by any means claim that all have been saints or angels, or even perfect in character; but the members of this family for several generations have ranked among the steady, law-abiding, industrious class of citizens who have helped to develop the resources and business interests of this country and make this Republic a model among the nations. Like most of the settlers in the Old Colony, the Presbreys were immigrants from England, and just the right kind of people to subdue the wilderness and plant the institutions of civil and religious liberty in the new world.

So, while I’ll be sure to remember William’s journey on July 30th, I won’t forget that had the British Navy caught him in that summer of 1711, none of this ever would have happened. 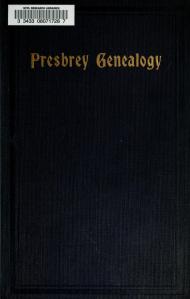 “To The Generations of Presbreys in Coming Time, I Bequeath this Genealogical Document” (1825 & 1845), available at Old Colony Historical Society, Taunton, Mass.

Military History Now, This is Gonna Hurt — Military Punishment Throughout the Ages