I spent last week in the woods with eleven alumni and instructors from the National Outdoor Leadership School. We were on a service trip and our assignment was to repair the suspension bridge where the Northville-Placid Trail crosses Moose Creek.

We started on Sunday morning when we were divided into cook groups. I was teamed with Ed and Haley, two very experienced and energetic backpackers. Our group clicked immediately and worked well together all week. I usually made breakfast and helped with the cleanup for the rest of the meals. They cooked delicious dinners and made sure we had enough to eat for lunch. When it started to rain hard one evening, Ed found the leaks in the tent and we rearranged our sleeping bags to keep dry. During a hike along the Cold River on Wednesday, Haley entertained us with riddles and stories about her previous back packing trips. 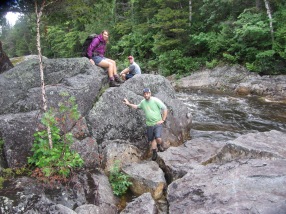 The original plan had been to replace only the decking of the suspension bridge. Once the old boards were removed the plan evolved into replacing the stringers that supported the deck boards and also rebuilding the ramp leading to the bridge from the northern shore. We also improved the nearby trails by cutting down brush and installing new fence posts to replace the ones that had been damaged by bears.

The work was hard. The lumber needed for the project had been dropped by a helicopter upstream of the bridge and I spent most of the first two days carrying it to where it was needed, sometimes wading across the creek with a board balanced on my shoulders. Others from the group removed the old decking and sawed the large 2 by 6 inch boards into three-foot lengths for the deck. Still others fabricated and installed the new stringers, posts and braces needed to support the deck. Because we were in a wilderness area chain saws were not permitted and all of the cutting was done with hand saws.

We broke camp before sunrise on Saturday and crossed the bridge for the last time just as the dawn was breaking.