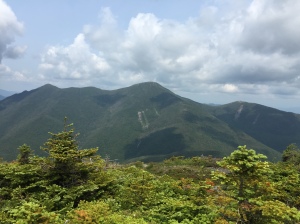 I needed a backpacker’s trowel but there were none at Eastern Mountain Sports. They suggested that I try a hardware store. Trips to the two located in Lake Placid did not turn up the trowel I needed. Almost as an afterthought I stopped into High Peaks Cyclery. Sixty minutes and $126.50 later I left with a new map, first aid kit, whistle, two books and the $1.99 trowel that had brought me there in the first place.

While browsing the shelves of camping equipment I met the owner, Brian Delaney. He and his family have been outfitting hikers and guiding trips into the Adirondack wilderness for the last twenty-eight years. He invited me to sit with him at his map table and after making sure that I had every item on his list of the “Ten Essentials” for outdoor survival he asked me what I had in mind. 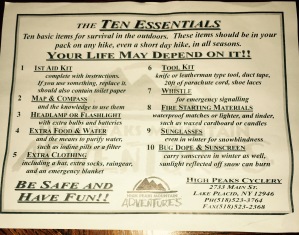 I told him I wanted to hike through Avalanche Pass and climb one of the 46 high peaks. He suggested Mount Colden and marked out a course with a yellow highlighter on the new map he had just sold me. 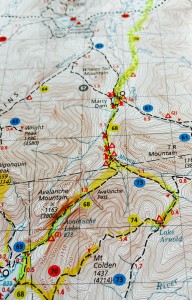 I awoke before dawn the next morning and arrived at the Meadow Lane trailhead at 6:00 AM. From here I followed an abandoned truck road to Marcy Dam, 2.7 miles away.

Mount Colden rises from the left behind what is left of the dam. Its distinguishing feature is the pointed false summit in the foreground.

There are two approaches to top of the mountain. The more popular trail approaches from the false summit side with a steady, gradual climb. At Brian’s suggestion I take the trail from the back side which is steeper but affords spectacular views of the MacIntyre Mountain Range.

Lake Colden is much wider and I take the trail down the east side. I focus too much on the ladders and cat walks and miss the intersection of the trail to Mount Colden. After backtracking a bit I reach the summit just before noon.

I enjoy the view for a few minutes and head back down after a quick lunch. I sign out at the Meadow Lane trail register at about 4:00 PM, ten hours and 15.2 miles after I began.