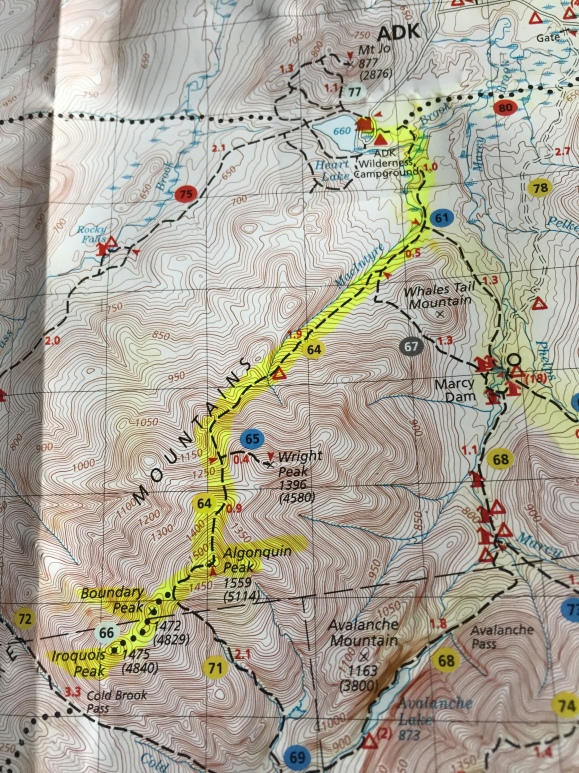 Leaving from from the Adirondack Log trailhead just before 7:00 AM, I stop at the McIntyre Brook waterfall at 8:21 AM, pass over Algonquin at 9:55 and reach the summit of Iroquois just before 11.

While enjoying a sandwich on Iroquois I remember back to July of 1975 when I worked as a counselor at Crumhorn Mountain Boy Scout Camp. I taught merit badge classes and lived in a large canvas tent with a wooden floor.

I was a pretty good instructor but what I loved most about that summer was the ceremony we held every Friday night to recognize scouts selected for the honor of joining the Order of the Arrow. It began just after dark in the middle of Lake Crumhorn where about twenty of us waited in the camp’s fleet of canoes. When the scout troops were all assembled in front of the mess hall, we lit torches made with strips of old tent canvas dipped in Kerosene and paddled to shore.

For the next forty minutes we told the legend of the Lenni-Lenape, a peaceful tribe that inhabited the Delaware River Valley long ago. When neighboring tribes started to raid their hunting grounds Chief Chingachgook asked “Who will go to the villages of the Delaware and warn them of the danger that threatens?” No one stepped forward except his son Uncas who volunteered and ran from village to village to provide the warning and recruit others who would volunteer their service for the good of the Lenni-Lenape.

In our ceremony Dave Jones played Chingachgook. I was Meteu, the medicine man, and Eddie Frazier played Uncas. I opened the ceremony by dancing around the council fire, pausing four times to chant a Lennai-Lenape blessing while shaking the large rattles I carried. Dave recited the legend of the Lenni-Lenape and then Eddie sprinted past the gathered campers tapping the new recruits on the chest as Uncas had done when he travelled from village to village to gather volunteers.

Try as I might I cannot remember the words to the songs we sang on those Friday evenings long ago other than the opening line Dave sang after I finished the blessing. I leave Iroquois singing it over and over again hoping that the rest of the words will eventually come to me.

They do not, but I smile anyways remembering that amazing summer in 1975 when I played a medicine man who danced around a council fire.